PUBG is a battle royale game that will test your military and survival skills. A hundred of players parachute to an island (there four to choose from). They must discover weapons, equipment, and, if they need it, also transport. The goal of each fighter is to stay alive, killing the opponents along the way. All participants are scattered on a rather big map. 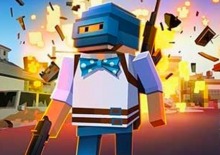 5
249
Play
On the island, there are several locations with different buildings (towns, camps, power stations, military bases, etc.). There are places with a lot of loot and it is of high quality. But here you will have to fight for it immediately after landing. And there are small locations where the loot is barely enough for 1-2 players, but at the very beginning it's calm here.
Periodically, a bombardment zone appears on the map, into which it is better not to meddle unnecessarily. Also, look out for airdrops (boxes on parachutes) which will contain high-quality weapons, disguise items or other useful perks. There are also several types of transport in the game. You will need it in order to quickly move from one location to another, and to always be in the safe zone.
There are plenty of weapons in the game: pistols, semi-automatic guns, machine guns, assault and sniper rifles. There are also four types of grenades. The most interesting thing is that in addition to first-aid kits, there are also boosts. These are energy drinks, pain relievers, and adrenaline syringes. All this will help you passively restore health and run fast. Good luck!
Top categories
This website uses cookies to ensure you get the best experience on our website. Read more
Close